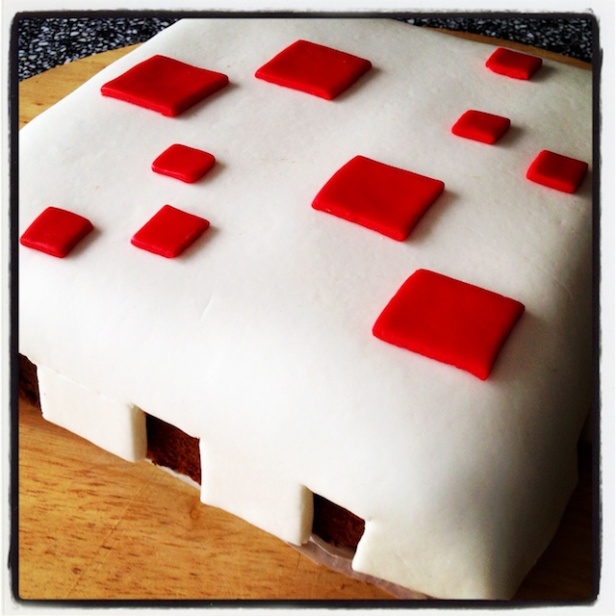 Why pick between cake, marshmallow, and fluffy buttercream, when you can have all three?

Till the boys were about 8, I had baked them cakes covered in frosting and fondant, and moulded into a myriad of objects and animals. Ducks, dinosaurs, trains, sports cars, monsters, a camping tent, ladybird (ladybug), even an entire multi-storey car park, you name it. They were no mean feats, either. Several took up to 6 hours of careful laboring, completely disproportionate to the velocity with which they’d end up in teeny tums.

Beyond 8,  the fondant-covered cakes took a welcome break, in favor of cupcakes. What was not to like in having these single-serve, immensely portable little beauties?

But my younger son, who is 10 today (hooray)(and yikes), decided to deviate from the new, mini-sized norm and asked for a special cake, covered in fondant, this year. Which immediately evinced quakes of fear and uncertainty. Did I still have “it”? The ability to mold fondant? The patience, and neck-muscle stamina, to slave over a cake for 3-4 hours after it had been baked? 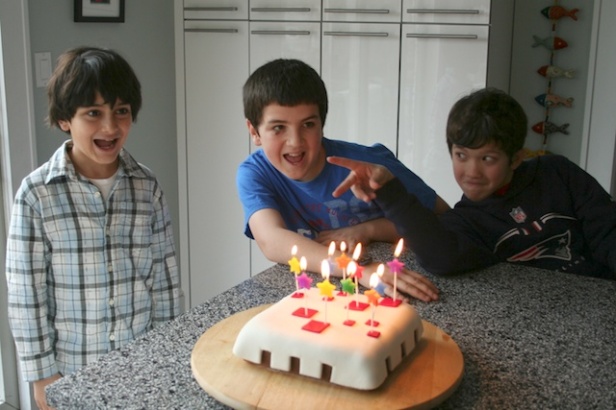 Well, I was about to find out. Though child #2 had requested a castle cake, Him Indoors (his dad) came up with the brilliant suggestion of a Minecraft cake.

(To the uninitiated, Minecraft is a 3D computer world where the user creates cities with building blocks, like an online Lego, while dodging monsters. Thing #2, a creative kid who wants to be an architect-artist-possible vet when he grows up, adores this game. Conveniently, one of the things a Minecrafter can create online is a virtual cake 😉 How does this cake look? Well, Northern New Jersey was about to find out as this cake soon traversed several dimensions out of the online world and into the real one.)

Thanks to handling two jobs at once, I wasn’t able to visit my favorite cake-supplies store, and found, (initially) to my horror, that I would have to make the dastardly fondant from scratch! And no, I hadn’t done this before.

Luckily for my sanity, I found a recipe that used just two ingredients – marshmallows and sugar – and went for it.

Here’s how you make marshmallow fondant: 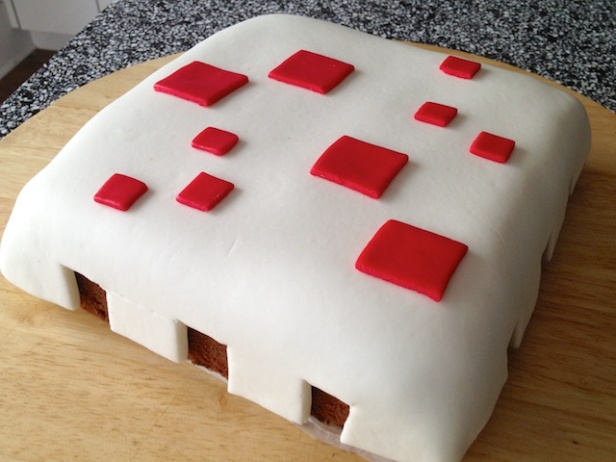 I separated some of the fondant and colored it red (with food coloring). Then, after the cake was cool and trimmed to a perfect flat-top square, I slathered homemade buttercream over the top and in its middle. The fondant, which is delicious, was carefully rolled out and placed over the cake. Careful trimming with scissors and knife, and it was done!

The words, “Thank you, Mummy, it’s fantastic! I can’t believe you did a Minecraft cake!” brought tears to my overstrained eyes, and a big grin to my well-sugared face 🙂

Happy birthday to our second born!

9 thoughts on “Crafting the Minecraft Cake”