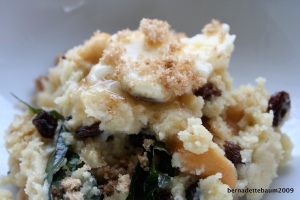 I had a much-needed lie-in today after weeks of early wakings (deliberate) and sleeplessness (unintended). Came downstairs to find husband and kids watching the Thanksgiving Parade on CBS , on which a commentator, doing the easiest job on TV, refers to Spiderman as Superman.  One superhero wears his underpants on the outside and a big S on his chest, the other’s in tights – not too hard to differentiate. But she got Pikachu right – the chubby yellow fellow in the Pokemon series (I would have guessed his name was Pokemon).

As I was reluctant to make pancakes or waffles (our Sunday regulars), and no one was in the mood for the weekday cereals, yoghurt or fruit, my kids and hubby voted for upma – an Indian pudding made of durum wheat. Great idea,  I thought!  It could well have been breakfast for the pilgrims and native Indians, being made of wheat, fruit and nuts and a pinch of salt.

Apparently, the real pilgrims would tend to have their previous day’s leftovers from lunch, their biggest meal, for breakfast. Other morning nosh possibilities include a pudding made of wheat (there you go!).

And here’s a nod to Thanksgiving’s origin: The harvest feast shared by the Plymouth colonists and the Wampanoag Indians in 1621 is considered one of the first Thanksgiving celebrations. Other indigenous American groups had celebrations of the harvest (and of thanks) for centuries before Europeans arrived in North America.

The pilgrims and natives would have eaten fowl and deer and hardly any vegetables, there would have been a generous use of spices, along with herbs, nuts and dried fruit. Certainly no pumpkin pie – but all the spices going into it (certainly into mine) – ginger, cinnamon, cloves, nutmeg – the native Indians and pilgrims would have been familiar with.

And so we arrive at this breakfast of Indians (southern Indians from India, that is), which my mother and grandmother and aunts used to make regularly, even though none of us has ever lived in the subcontinent. It’s made of wheat, milk, nuts, raisins, salt – and at least four of those ingredients were available to both pilgrims and American Indians. That’s my excuse for making this today and I’m sticking to it.

Upma (which means salted flour) is made of  No. 1 durum wheat (I don’t know why all the packets say that but I’m impressed), or semolina, which has a high protein and gluten content – making it excellent for breads, pastas, couscous, and in this case, a breakfast pudding. It is savory by nature (as onions must go into it) but this version below is savory and sweet. I have omitted chillies, ginger and cummin, which often go into an upma.

The final product will look a bit like couscous, except it won’t be in separate granules and will be much, much smaller (see photo) and will tend to coalesce together, rather than be separate grains. See, another reason for this as a Thanksgiving breakfast – the message of unity!

It’s a beautiful, sunny day and I am thankful for my wonderful husband and children, for the warm welcome and hand of friendship extended by our friends in the US (during their most trying economic year in decades), the very diverse and friendly neighborhood we live in, and the happy, ever-optimistic Americans we have met.

The amounts below should serve 4.

2 thoughts on “Thanksgiving Breakfast is.. Upma!”