This admission will horrify many a grandmother, but our oldest son never knew what a sweet was until he was 6 years old. Undoubtedly my fault for attempting to sway the course of nature and avoid him inheriting my debilitating weakness for sweets. I did succeed, for by 6, his palate for smoked salmon, pesto, sushi and fresh fruit was so determined that he had no interest in candy.

While he loves chocolate now, he doesn’t hanker after it in large amounts, nor does the word ‘cake’ quicken his pulse as much as the word ‘computer.’ This upsets me no end, since I am a maker and baker of the stuff (cake, not computers) and enjoy stuffing my face with it too.

On the upside, while he says No to cake elsewhere, my firstborn adds, “I only like your cakes, Mummy.” Which is rather satisfying. Except I don’t see him eating any.

Anyway, our second son came along and changed all that. From pre-birth days, he would kick in excitement if I so much as drank anything sugary, and, well, if I ate chocolate, there would be no sleep for me that night thanks to the in-belly gymnastics. Postnatally? He’d give up his three square meals a day for a barrel of candy any time.

So, upon persuasion by sweet-loving child #2, we made a trip recently to Dylan’s Candy Bar in Manhattan which, surprisingly, went down well with both children (and both adults). The colours, the shapes, the variety, the .. CANDY! We honestly didn’t know where to look in this brainchild store of Dylan, daughter of the designer Ralph Lauren.

Still, there was too much choice and my younger son came away with not very much. He grabbed a modest-sized plastic ‘house’ and filled it with a few jellybeans, sour gums and M&Ms, put back the giant lollipop (see photo) and that was that.

Fabulous eye candy though, even if you haven’t the stomach for it! 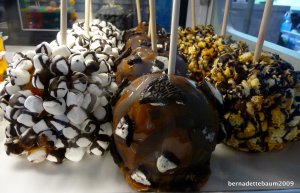 (All text and photos or images are copyright protected. Please do not reprint any stories, recipes or photographs without the author’s permission.)